Costa Blanca inland - stunning scenery awaits particularly around the Guadalest Valley area just a few miles north of Benidorm. Guadalest village with cliff top fortress and spectacular surrounds is a popular day trip, but for those who want to explore and walk the Guadalest Valley accommodation in locations such as Alcoy and Benimantell is available here on Iknow Spain. A selection of Costa Blanca villages have two halves - scenic raised old towns slightly inland and pretty beach fronts. Two locations in this ilk include Altea just east of Benidorm and delightful Javea to the south of Denia. Javea makes a particularly good choice for relaxing family holidays.

Other popular inland Costa Blanca choices include Elche, the town of palm trees and home to the Huerto del Cura Gardens or Orihuela onetime capital of the region which retains its cultural heritage and has a stunning Gothic cathedral dating from the 14th century. The city of Murcia is also growing in popularity - day trips here to see the stunning facade of the Gothic Santa Maria Cathedral are especially popular. Alongside this, Murcia's developing cultural sites and museums make it a superb choice for a city break with easy access down to the coast and historic port town Cartagena (Republican port stronghold during the Spanish Civil War - you can learn more at Cartagena's Spanish Civil War Museum) and east via the fast A7 to Alicante.

If you've car rental from Alicante Airport (see weblink right for Holiday Autos best car hire deals), then the drive alone up the CV70 from Benidorm to Guadalest is one of the drives of your life. You're pushing up through the stunning Sierra de Aitana mountains on-route. The village of Guadalest, sits high on a peak carved into a rocky outcrop to great effect. Popular for day trips up from the resort (the drive takes less than an hour), this inland Costa Blanca town is one of the most stunning surrounded as it is by the Sierra de Aitana, the Sierra de Serrella and the Sierra de Xorta. The Moors did the hardwork initially here, building irrigation channels and terraces. The dramatic fortress and castle at Guadalest is Moorish. Within the town, which caters well for tourist visitors, there's a selection of museums including an ethnographical museum, alongside numerous restaurants, cafes and delightful arts and crafts shops. Numerous walking paths stretch out from the town (see the Guadalest webguide right for maps). Nearby accommodation bases include Alcoy and Benimantell.

Another popular base for walking holidays in Inland Costa Blanca is historic Alcoy. The Sierra Mariola Nature Park, the Carrascal de la Font Rotja and the Sierra els Plans and La Serreta are all prime walking territory on Alcoy's doorstep. The Font Roja Nature Reserve centre sits just outside Alcoy (see the More Alcoy Tourist Info weblink right for directions, and comprehensive details on Alcoy's surrounding Nature Reserves). Alcoy far from relies on tourism alone, it's workaday Spanish here with some thriving industry and a number of architecturally interesting bridges - the town is known for its bridges. Alcoy's archeological museum on Placeta del Carbo (tel. 965 537144) is well worth a visit to find out more on Palaeolithic and Neolithic sites in the area. A particular highlight in the town is the Spanish Civil War converted anti-aircraft shelter situated underneath the now Alcoy Art School and Paseo de Cervantes (Spanish Civil War Anti-Aircraft Shelter, C/Alzamora, 1. Alcoy. Tel. 965 537153). Old air-raid shelters from the Spanish Civil war are beginning to be converted into museums in Southern Spain Republican strongholds (there's one in Cartagena too south of Murcia which is now a Spanish Civil War Museum). They reveal some of the hidden history of the Spanish Civil War, namely the bombing of strategic Republican towns and ports by Italian and German Aircraft.

Javea (Valencian Xabia) is an interesting mix of culture, history, best family Costa Blanca beach resort and prime walking base. As a tourist resort it retains a low key family oriented stylish feel, with pretty promenade and glorious sandy beach bay. Javea is one of the prettiest family holiday bases on the the Costas. Blue flag beaches all the way here, with the fine sands and shallow waters of main beach El Arenal especially making it a superb Costa Blanca family holiday base.

Before it spread its wings down to the coast as a top beach tourist resort, the inland whitewashed village area of Javea with narrow streets was the centre. Renowned as one of the sunniest spots on the Costa Blanca coast, Javea sits between two promontories - the Cabo de San Antonia north and the beautiful pine covered Cabo de la Nao south.

The inland village of Javea couldn't be more attractive - rejas, balconies, charming old town houses and the Gothic San Bartolome church await. Head for the Archaeological and Ethnological Museum on Calle Primicies (Tel. 965 791098) to find out more on Javea's history. A collection of both Roman and Medieval ceramics are held here.

Much like Javea further north on the Costa Blanca, Altea blends both low key seafront tourism with cultural inland village well. Just north of Benidorm, separated by a promontory of the Sierra Helada, Altea makes for an interesting contrast to its mammoth resort neighbour.

Altea has some wonderful craft shops, with typical blue tiled Parochial Church on the hill top village. Back on the coast Altea has pretty cove beaches and a small port. An adjacent delightful paseo maritimo runs the stretch of the coast. For a relaxing Costa Blanca beach base, close to a culture rich hilltop village with a choice of fine restaurants, plus easy access to the family holiday attractions of Benidorm Altea makes a superb choice as base. 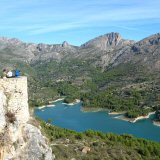 Guadalest, Views of the Sierra d'Aixorta from the Fortress 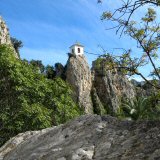 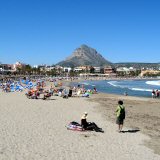 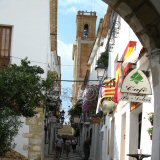 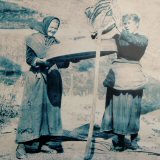 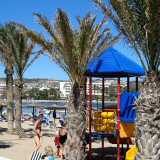 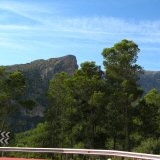