Gandia has over 20km of stunning clean golden sandy beach area, with adjacent promenade with plenty of restaurants. You're only 65km south of Valencia here in Gandia, and the resort feels more Spanish than typical Costa Blanca. Beautiful beaches, easy access north to Valencia, a selection of historic sites and museums in Gandia town including the renowned Palacio Ducal de los Borja palace.

Top attractions in Gandia include its fine sandy beaches, plus a choice of walking routes and cycling trails which push out south through villages like Vilallonga and L'Orxa. Another coastal walking trail takes you through the marshland and Gandia dunes. Check with Gandia's tourist information office for walking maps and routes.

Another big pull in the town is the Palacio Ducal de los Borja dating from the 14th century, with a fair few Baroque and Renaissance add ons in the following centuries. Gandia was experiencing rather a boom in the latter 15th century when Duke Francisco de Borja was in residence here. This Borja was born her at Ducal Palace. Gothic, Renaissance and Neo classical architecture all contribute to this spectacular building. Check the Palau Ducal Palace weblink right for guided tour times and historical detail.

Escuelas Pias on Plaza Escuelas Pias was once home to Gandia's university, but died a death when the Jesuits were expelled from Spanish territory. The facade however remains and is well worth a look with bust of founder Sant Francesc de Borja. A number of other monuments and 14th century historic sites are dotted about the town. For details check the Valencia Region webguide right/Gandia section. 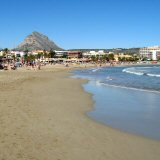 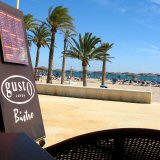 Javea beachfront cafes along the promenade 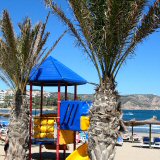 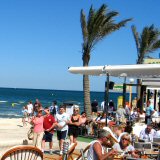 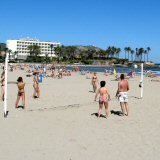